Last Friday I was talking with a friend about simulating survival times from an experiment where most (if not all) events are happening within a short amount of time from inception. In other words, an experiment where the survival probability drops rapidly during the first days, staying then approximately flat until the end of the study.

This made me think about mixed cure fraction models, that is a model of the kind:

with \(\pi\) being the proportion cured and \(S_u(t)\) the survival function for the uncured subjects. Assuming \(S_u(t)\) follows an exponential distribution (for simplicity and from now onward), this corresponds to a survival curve like the following: 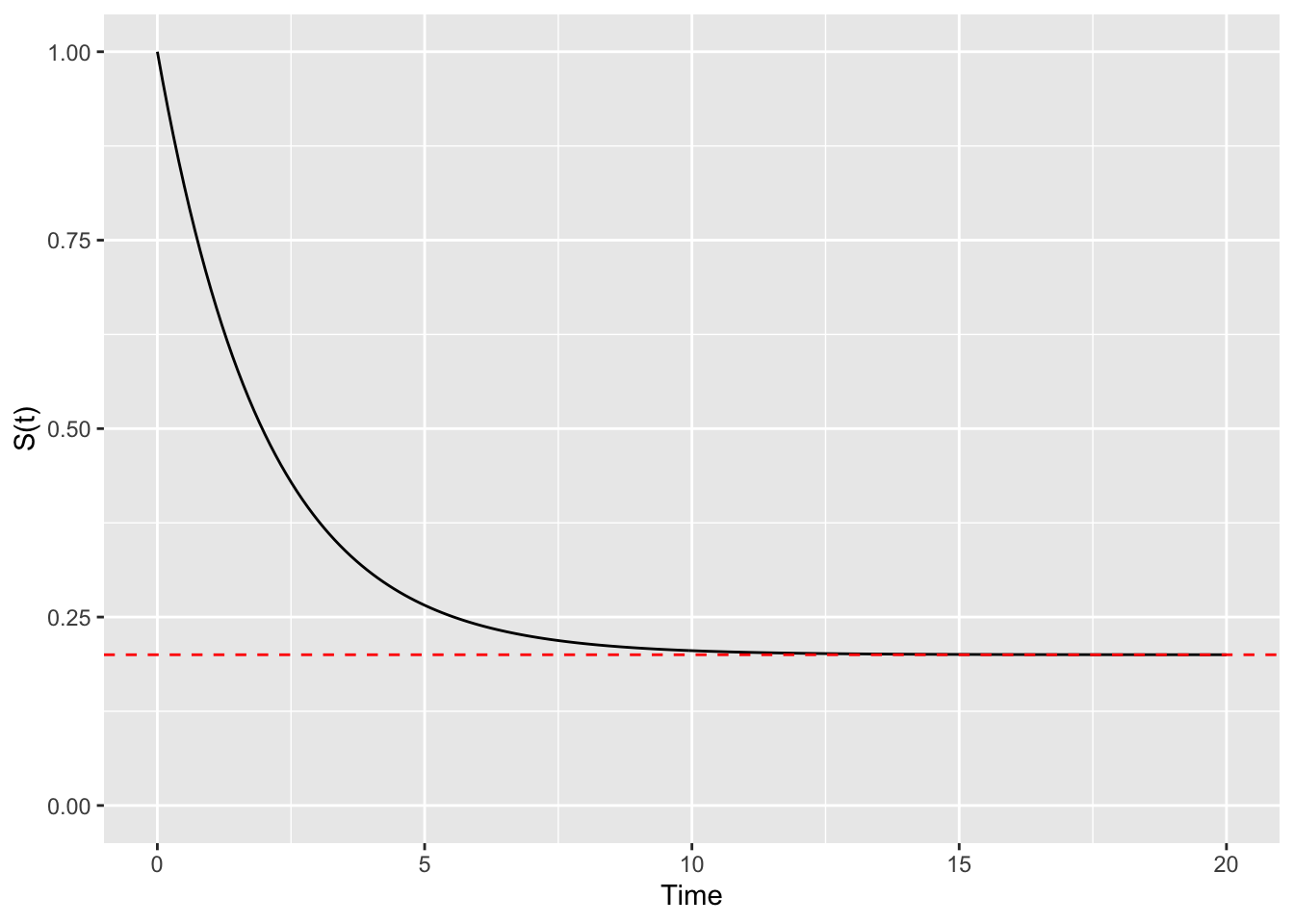 where \(\pi = 0.1\). With this model, the cure fraction creates an asymptote for the survival function, as \(100 \times \pi\)% of subjects are deemed to be cured; of course, \(\pi\) can be estimated from data. Interpretation of mixed cure fraction models is awkward, as one is assuming that subjects are split into cured and uncured at the beginning of the follow-up (which might not be the most realistic assumption), but discussing cure models is outside the scope of this blog post (and there are many papers you could find on the topic).

Back to the question, how to simulate from this survival function?

Well, as with most things these days, we can use the inversion method! First, we actually have to define which individuals are cured and which are not. To do so, we draw from a Bernoulli distribution with success probability \(\pi\):

Then, we simulate survival times e.g. from an exponential distribution (with \(\lambda = 0.5\)). We use the formulae described in Bender et al. (which is in fact the inversion method applied to survival functions):

Finally, we assign to cured individuals an infinite survival time (as they will not experience the event ever):

Of course, now we are required to censor individuals, say after 20 years of follow-up:

…and there you have it, it’s done.

What we want to do next is checking that we are actually simulating from the model we think we are simulating from. Let’s first check by fitting a Kaplan-Meier curve: 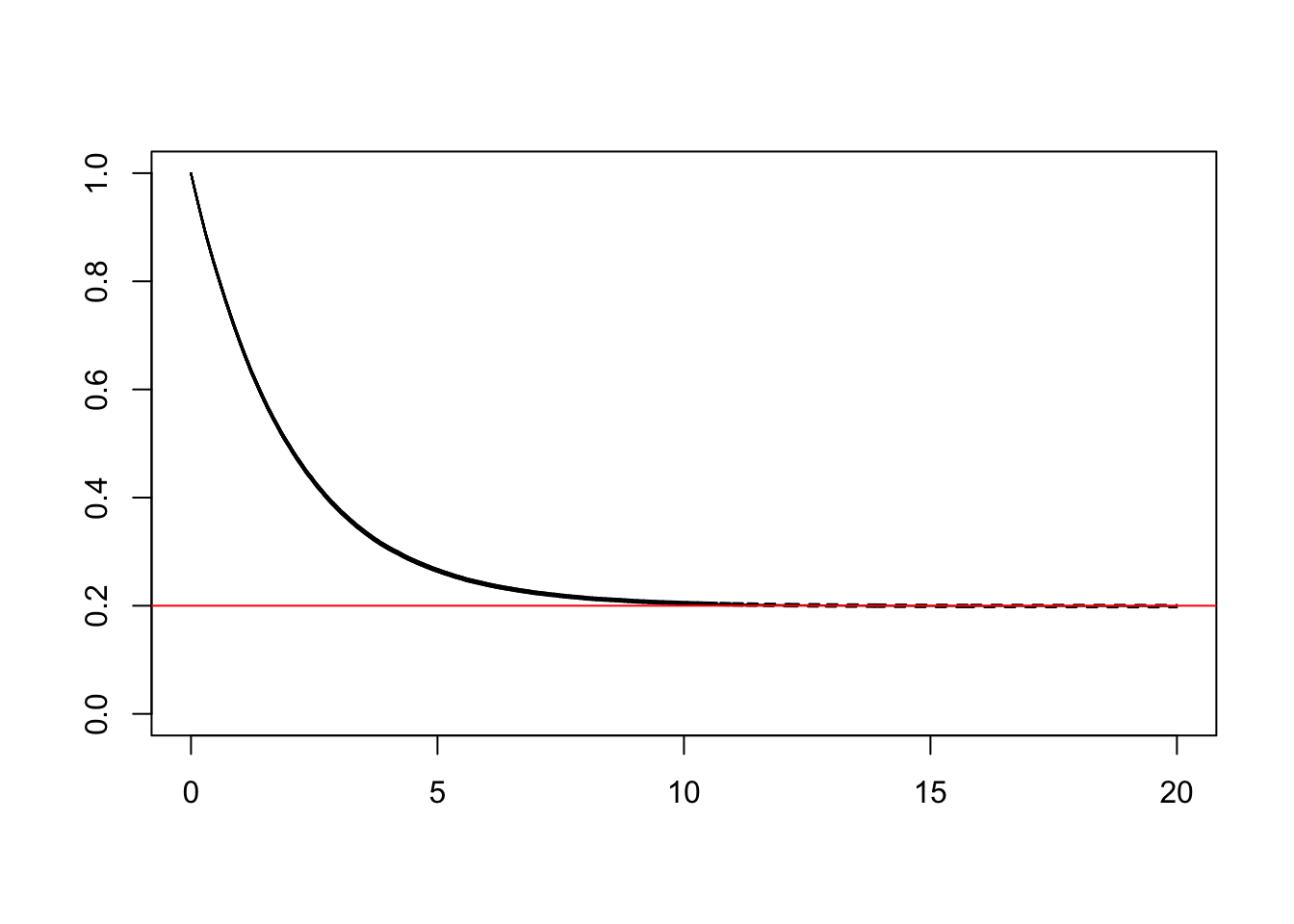 …which looks similar to the theoretical curve depicted above. Good!

Then, we could try to fit the data-generating model using maximum likelihood. The density function of the cure model is defined as

where \(F(t) = 1 - S(t)\) and \(f_u(t)\) is the density function for the non-cured subjects (e.g. from the exponential distribution, from our example above). Therefore, the likelihood contribution for the ith subject can be defined as:

In R, that (actually, the log-likelihood) can be defined as:

Some comments on the above function:

Now, all we have to do is define some starting values stpar and then run optim.

The true values were:

…which (once again) are close enough to the fitted values. It does seem like we are actually simulating from the mixture cure model described above.

In conclusion, obviously this might not fit the actual experiment too well and therefore we might have to try other approaches before considering our work done. For instance, we could simulate from an hazard function that goes to zero after a given amount of time \(t^*\): this approach can easily be implemented using the {simsurv} package. The proof is left as an exercise for the interested reader.